Alan Palmer on June 21, 2017
Canaries in the Kitchen-  The Dangers of Teflon Cookware

In two to five minutes on a conventional stovetop, cookware coated with Teflon and other non-stick surfaces can exceed temperatures at which the coating breaks apart and emits toxic particles and gases linked to hundreds, perhaps thousands, of pet bird deaths and an unknown number of human illnesses each year, according to tests commissioned by Environmental Working Group (EWG).

In new tests conducted by a university food safety professor, a generic non-stick frying pan preheated on a conventional, electric stovetop burner reached 736°F in three minutes and 20 seconds, with temperatures still rising when the tests were terminated. A Teflon pan reached 721°F in just five minutes under the same test conditions (See Figure 1), as measured by a commercially available infrared thermometer. DuPont studies show that the Teflon off-gases toxic particulates at 446°F. At 680°F Teflon pans release at least six toxic gases, including two carcinogens, two global pollutants, and MFA, a chemical lethal to humans at low doses. At temperatures that DuPont scientists claim are reached on stovetop drip pans (1000°F), non-stick coatings break down to a chemical warfare agent known as PFIB, and a chemical analog of the WWII nerve gas phosgene.

For the past fifty years DuPont has claimed that their Teflon coatings do not emit hazardous chemicals through normal use. In a press release, DuPont wrote that “significant decomposition of the coating will occur only when temperatures exceed about 660 degrees F (340 degrees C). These temperatures alone are well above the normal cooking range.”

These new tests show that cookware exceeds these temperatures and turns toxic through the common act of preheating a pan, on a burner set on high.

In cases of “Teflon toxicosis,” as the bird poisonings are called, the lungs of exposed birds hemorrhage and fill with fluid, leading to suffocation. DuPont acknowledges that the fumes can also sicken people, a condition called “polymer fume fever.” DuPont has never studied the incidence of the fever among users of the billions of non-stick pots and pans sold around the world. Neither has the company studied the long-term effects from the sickness, or the extent to which Teflon exposures lead to human illnesses believed erroneously to be the common flu.

The government has not assessed the safety of non-stick cookware. According to a Food and Drug Administration (FDA) food safety scientist: “You won’t find a regulation anywhere on the books that specifically addresses cookwares,” although the FDA approved Teflon for contact with food in 1960 based on a food frying study that found higher levels of Teflon chemicals in hamburger cooked on heat-aged and old pans. At the time, FDA judged these levels to be of little health significance.

Of the 6.9 million bird-owning households in the US that claim an estimated 19 million pet birds, many don’t know that Teflon poses an acute hazard to birds. Most non-stick cookware carries no warning label. DuPont publicly acknowledges that Teflon can kill birds, but the company-produced public service brochure on bird safety discusses the hazards of ceiling fans, mirrors, toilets, and cats before mentioning the dangers of Teflon fumes.

As a result of the new data showing that non-stick surfaces reach toxic temperatures in a matter of minutes, EWG has petitioned the Consumer Product Safety Commission (CPSC) to require that cookware and heated appliances bearing non-stick coatings must carry a label warning of the acute hazard the coating poses to pet birds. Additionally, we recommend that bird owners completely avoid cookware and heated appliances with non-stick coatings. Alternative cookware includes stainless steel, ceramic and cast iron, neither of which off-gases persistent pollutants. 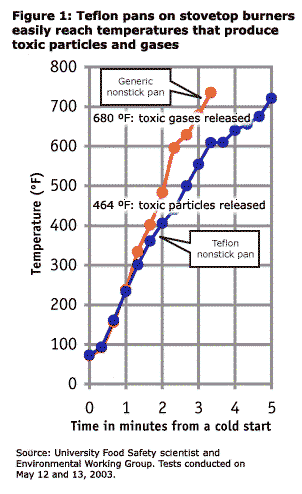 I have been a practicing chiropractor for 30 years. Originally from Minnesota, I graduated from Northwestern College of Chiropractic in 1985. Since 1996 and 1998 respectively, I have provided chiropractic care for the players, coaches and employees of the Arizona Coyotes National Hockey League Hockey Club and the Arizona Diamondbacks Major League Baseball Team. In addition, I provided care for the San Francisco Giants in spring training for 7 years. Since 1985 I have been studying functional medicine applications, Complementary Alternative Medicine (CAM) concepts and advanced clinical nutrition strategies. I welcome stubborn and complicated cases and those that traditional allopathic medicine has failed. One of my goals is to help people to reduce their dependency on medications. I do this by addressing the underlying causes of their illness or disease rather than treating their symptoms. This is accomplished by focusing on the restoration of normal healthy biochemistry and function through diet, exercise, supplementation and lifestyle modification.

Should we Lower Cholesterol as Much as Possible?

Just say NO to Wheat!

Connexins- The Bridges Between our Cells